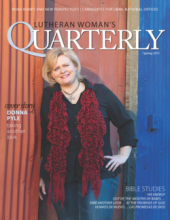 But God demonstrates his own love for us in this: While we were still sinners, Christ died for us (Romans 5:8).

The story haunted me. Told for years in hushed tones by family members, it recounted courage, sorrow, and consequences. My grandfather and his brother came to the United States from Germany as World War I broke out, leaving behind their two younger brothers. After the Great War, the older of the two remaining brothers became a successful man, owned his own business, married, and raised two children.

The brother was generous toward his employees, supplying them with food during the postwar years. The time came, however, when he was advised by party officials not to give food to his Jewish employees. He refused to comply with that request and continued to supply food to the Jewish households. Later, when threatened to cease or else face recriminations, he continued to provide food, secretly.

Suspicions began to mount about my great uncle’s resistance efforts, but his defiance of the edict could not be proved … until the day someone turned him in to the authorities. He was imprisoned, survived, and was released at the end of World War II.

Each time I heard the next part of the story, I would gasp. “The person who turned him in? His wife!” I found it hard to come to terms with what she did. My family vilified her.

A few years ago, while watching a documentary about Dietrich Bonhoeffer, I heard something that caused new light to shine on my family’s story and stirred me to take another look at what happened, this time from the wife’s perspective. The narrator shared that if both a mother and a father were to be imprisoned for committing a crime against the state, their children would be taken away from them permanently and placed for adoption. However, if a spouse were to help expose the criminal acts of the other spouse, the “cooperative” spouse would be exempt from the repercussions and their children could remain with the spouse who had complied with the state.

One can only speculate how discussions played out in their home as, with each passing day, it became clear that punishment loomed inevitably. My great uncle and his wife made their individual decisions of conscience and lived with the consequences.

The story is still hard for me to fathom. Yet I am appreciative that additional details allowed me to see this story from another view. I applied to my heart what I observed and learned a lesson from what I saw (Proverbs 24:32).