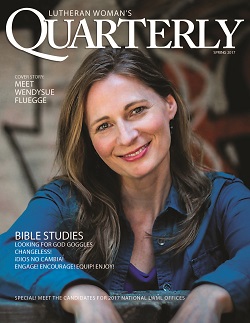 As the doors of the Fort Worth hotel elevator parted, I froze when I recognized one of the women inside. My eyes questioned, “Are we allowed to join you, or should we wait for the next car?” But she grinned and beckoned us inside.

The woman leaned over to read my 7-year-old daughter’s convention badge and smiled. “We have the same name!” She continued, “Would you like to be a member of the LWML someday?”

My daughter declared confidently, if not a bit defiantly, “I already am a member of the LWML.” Aghast that my child’s response might have come across as too sassy, I searched for words to cover any offense. The woman’s face revealed nothing but love for my child’s remark and acceptance for her mom. From that day in June 1987, two Elizabeths I loved.

Elizabeth “Betty” Duda was elected LWML President later that day. Dozens of hugs and words of congratulations following her election caused Betty to be last on the dining room buffet line; she wasn’t alone. A father-daughter trip to the zoo that morning led to the other late-arriving Elizabeth filling up her plate right next to Betty. Both Elizabeths chatted easily about the special day they had experienced.

The two Elizabeths met up again the next year when, as zone president, I chaired our LWML Atlantic District's convention host committee. Betty was our banquet speaker. At the close of convention, on the day of my 35th birthday, Betty pressed a Personnel Resource Form into my hands, encouraging me to fill it out and give to my district president so that I might be considered for a national committee.

I heard nothing more after that but realized not everyone gets an opportunity to serve. Years later, that district president revealed to me she had chosen not to submit my form, thinking I was too young and inexperienced. I assured her I held no regrets for her decision. To this day, Romans 8:28, my favorite verse (and Betty’s) reminds me in all things God works for the good.

Ten years later, I was elected district president. Betty was invited to be the guest speaker for my final convention, which coincided with my soon-to-be-married Elizabeth’s birthday; she traveled home from college that weekend to serve as my page and to see her friend Betty.

At each national convention, I would seek Betty out, receiving encouragement for my LWML journey. At the Des Moines convention, in 2015, we shared what was to be our final earthly conversation, filled with the same loving affirmation I received the day we met on the elevator.

Betty looked radiant as we said our goodbyes. The convention photographer happened to be standing nearby and snapped the photo that appears on the following page.

Shortly before this past Christmas, after learning Betty had entered hospice, I whispered into my Elizabeth’s ear, “Betty’s dying,” my eyes welling up. The words Betty’s pastor spoke during her funeral sermon comfort me to this day: “God is with you in your tears. Your sorrow is born of love and is godly in His sight.”

3  Remembering Betty
Memorials from LWML Past Presidents and President
4   Meet Wendysue
8   Proverbs 3:4–6 … again?
10   Finding Home: Living on the Streets of New Orleans
12   A Race to the Finish
26   Candidates for LWML National Offices