YOUR MITE OFFERINGS HAVE MADE AN IMPACT!

Since LWML’s beginning over 75 years ago, Lutheran Women in Mission have been involved in the ministry and mission of giving mite offerings to mission grant recipients throughout the world. One such example occurred in the 1950s. The LWML helped secure Holy Hope (Seibo Gakuen) Lutheran Junior & Senior High School’s future.

Recently, LWML Recording Secretary Ginger Starrett had the opportunity to meet Tim Drawbaugh, a teacher currently working at Holy Hope. To quote Tim, “Had it not been for the LWML initiative in the late 1950s, the school may not have succeeded and there would be no Lutheran junior and senior high school in Hanno (50 minutes NW of central Tokyo). Tim went on to say, “Japan has a culture that is highly resistant to the Gospel. However, God has graciously given the opportunity for seeds to be sown over the years at Holy Hope in cooperation with the LWML.”

Read more and see pictures of the school at www.lwml.org/home. Go to the Missions tab and scroll down to Your Mite Offerings Have Made an Impact!

Lutheran Braille Workers has been providing God’s Word to the visually impaired since 1943, utilizing the NIV Bible for the past 25 years. With the use of the ESV Bible by the LCMS, LBW desires to offer people with visual disability the opportunity to worship and study with the same translation of the Bible as sighted people. Your mite offerings given in prayer will assist in the cost of producing the ESV Bibles in large print and zinc plates for each Braille Work Center.

On October 20, 2018, volunteers, staff, donors, and recipients of LBW’s materials will come celebrate LBW’s 75th anniversary at the Home Office in Yucaipa, California with a dinner gala. LWML President Patti Ross will be one of the gala speakers. To learn more about this LWML mission grant, visit www.lwml.org/2017-2019-mission-grant-14.

GOD’S BLESSINGS UPON OUR LWML FAMILY 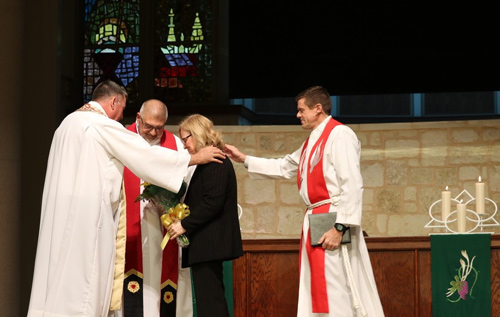 We all love to celebrate special events with our family like baptisms, confirmations, birthdays, and weddings. This past Sunday, Sept. 23, Rev. Dr. Robert Roegner, LWML Pastoral Counselor 2013–2017, was installed to his missionary position with The Apple of His Eye Mission Society at Concordia Lutheran Church in San Antonio, Texas. Pastor Roegner and his wife, Kristi, who most recently served on the LWML Church Workers in Mission Task Force, will be working with The Apple of His Eye founder, Steve Cohen and his wife, Nancy, as missionaries in Israel. They will be working with Immanuel Ministries and Immanuel Lutheran Church in Israel.

Another reason for the LWML family to mark this day is the fact that this outreach in Israel was made possible, in part, with your Mite Box Offerings from last biennium. You may remember the mission grant paid to The Apple of His Eye Society to do missionary work in Israel. Now, as we would following any family celebration, we continue in prayer for Pastor Roegner, Kristi, Steve and Nancy as they set out to witness to the lost sheep of Israel. Thank you for your prayers and for your mission support! To read more and communicate with these missionaries go to their website: www.appleofhiseye.org.

Nearly 290 LWML women and men gathered together at the Orlando Airport Marriott Lakeside Hotel in Orlando, Fla. on September 28–30 for the 2018 LWML Florida-Georgia District (FGD) Convention with the theme based on Isaiah 41:10, Fear not, for I am with you; be not dismayed, for I am your God; I will strengthen you, I will help you, I will uphold you with my righteous right hand. On Friday afternoon, Phil, a former Lutheran teacher and two time cancer survivor, and others from the Phil’s Friends organization were at the convention and were involved with the Servant Events of assembling care packages and coloring “Cards of Hope” for those affected by cancer. Another Servant Event had participants creating beautiful crosses in honor and memory of LWML Past President Betty Duda and then donating them in her name, to God’s glory, to the independent living residents of Lutheran Haven in Oviedo, Fla.

Following the Opening Communion Worship Service, the convention was convened by LWML FGD President Trish Aamoth who officiated over the business of the district including bylaw revisions, election of officers, and voting for 12 district mission grants totaling $103,798.01. Saturday morning Bible Study was led by Jr. Pastoral Counselor Rev. Alan Koch. LCMS FGD President Rev. Dr. Gregory Walton brought greetings and was Proclaimer at the Sending Service. The keynote speaker was Rev. William Weedon, host of a daily radio show/podcast on KFUO and author of several books including the soon to be published children’s book, See My Savior’s Hands. He also served as a presenter in the “Lunch ‘N Learn” interest sessions. 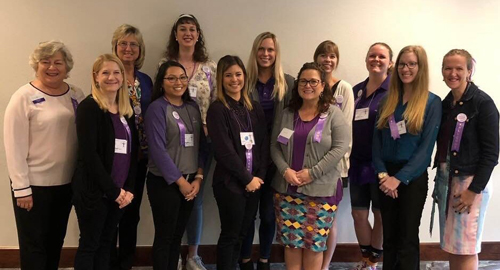 Other interest session presenters included: Rev. Dr. Robert Roegner who spoke on Pastors and the LWML; Kristi Roegner who informed on the Apple of His Eye Mission Society; Rev. Mark Jeske who talked about his bringing the Word of God to viewers of Time of Grace; and LWML FL-GA District Past Presidents, current President Trish Aamoth, LWML President, and Young Woman Representatives (YWRs) who gathered to share about LWML. LWML President Patti Ross greeted the attendees with news from the LWML and commented, “FL-GA women are eager and ready to greet the LWML as one of the host districts for the Mobile 2019 LWML Convention. I’m looking forward to seeing many of them again in June.” A banquet was held Saturday evening which included pinning of the YWRs. Convention concluded Sunday morning with a Prayer Breakfast, Sending Service, and installation of officers.

The Upper Kaskaskia Zone welcomed 253 attendees to the 39th Biennial LWML Southern Illinois District (SID) Convention held at Christ Our Rock Lutheran High School (CORLHS), Centralia, Ill., September 28–29. The convention theme for the LWML SID was based on Psalm 100:5, For the Lord is good; his steadfast love endures forever, and his faithfulness to all generations. The convention celebrated the district’s 75th Anniversary with “Decades of Missions” through memories of God’s abundant blessings with power point presentations, banner displays, past district presidents, mission speakers from past decades, and the Young Woman Representatives (YWRs) looking to the future. The Committee on Young Women planned the Friday Night activity, H.A.T.S. (He Achieves Total Salvation). 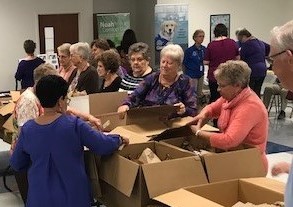 Gifts from the Heart & mission service 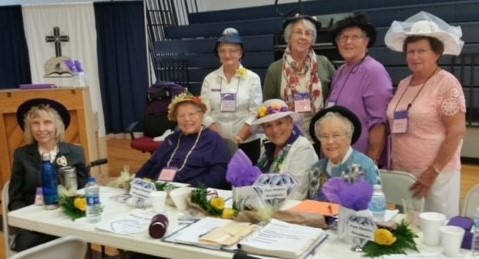 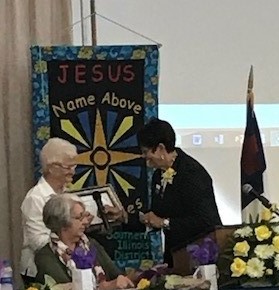 Gifts from the Heart ingathering items were collected for CORLHS and items of monetary gifts for computers, reams of copy paper, Kleenex tissues, dry erase markers, and hand sanitizer were dedicated. The selection of 13 mission grants and the approval of a mission grant goal of $60,000 was reported. Following the installation of officers and the closing devotion and prayer, the convention was adjourned by the newly elected LWML SID President Diane Grebing. 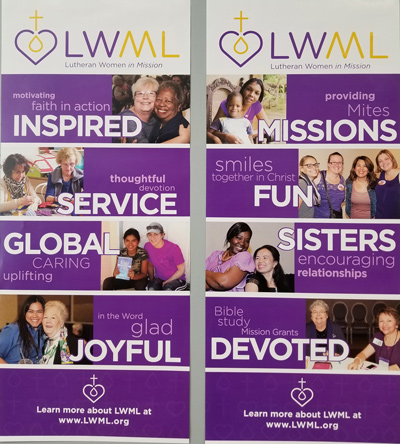 To order more LWML witness resources and products, visit www.lwml.org/home and click on the SHOP tab. 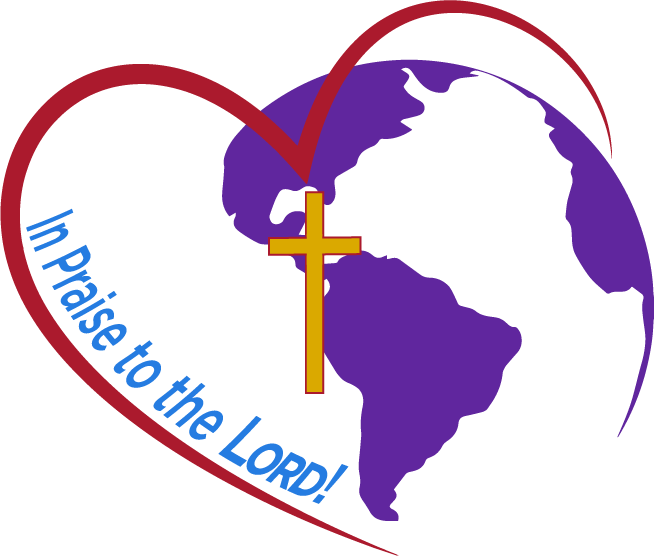 Make your plans now to study and rejoice in His Word, sing praises, and declare His glory in Mobile, Alabama, June 20–23, 2019!

Check out www.lwml.org/2019-convention for more details. 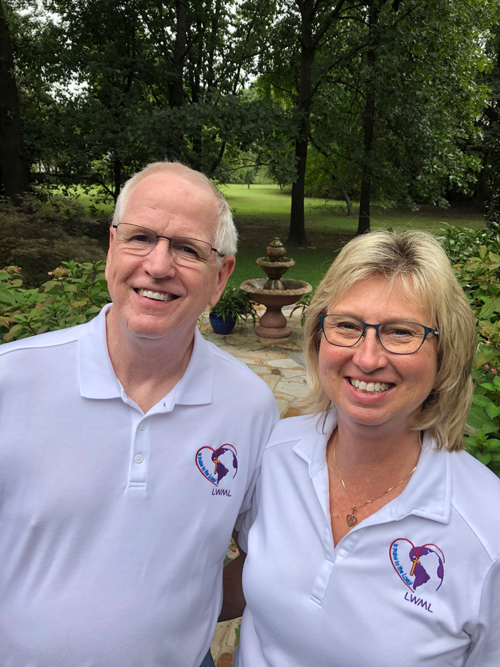 The 2019 LWML Convention Host Committee from the LWML Florida-Georgia, Gulf States, and Louisiana-Mississippi Districts invites you to join LWML President Patti and husband Bill in sporting the official 2019 LWML Convention polo shirt. Wearing this shirt affords an opportunity to share our relationship with our Triune LORD with others.

No shirts will be sold at convention.
View the order form at www.lwml.org/2019-convention.