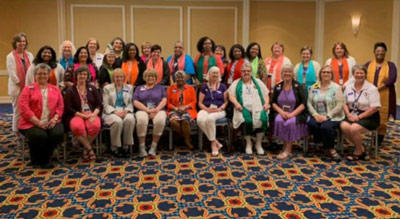 The Heart to Heart Sisters program is an intentional effort to ensure multicultural women participate in the life and work of the LWML. The training aids districts in setting up local programs that encourage mentoring and leadership training.

During the convention the new Heart to Heart Sisters District Leaders joined other Heart to Heart Sisters, Young Women Representatives and other convention volunteers in opening the fifth meeting of the convention with a procession of mission flags representing 76 countries. Five new flags were added to the procession this year representing mission grants provided by LWML in Egypt, Jordan, Madagascar, and Turkey, as well as formally recognizing the mission grants given to organizations helping Native Americans through Lutheran Indian Ministries. 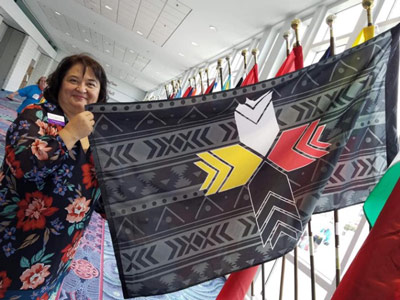 Melissa Salomon is displaying the Lutheran Indian Ministries flag. Melissa wrote, "Inaugurating a tribal nations flag at this convention and Native American Heart to Heart Sister Rebecca will carry the flag in the parade of nations. Here’s a peek at the flag."

Eighty-one Young Women Representatives (YWRs) attended the Mobile Convention. They made themselves known throughout the convention by their participation in sorting the Gifts from the Heart donations, walking beside their district presidents during the Friday morning banner procession, and carrying a flag in the mission flag procession.

Between convention meetings the YWRs could be seen talking with many of the convention participants and asking for autographs to complete the scavenger hunt. In the evenings the group gathered with the Committee on Young Women and enjoyed a time of debriefing, community building, and refreshments.

When interviewed for the convention newsletter, Kendra Schuettplez, a YWR from the FL-GA District stated, “I am beyond excited to be a YWR at such a large event! As a YWR, my goal is to learn from the current leaders so that I can grow and maybe one day be a leader, too.”

As these new YWRs return to their districts they are encouraged to continue their participation in LWML on all levels of leadership. District presidents are also encouraged to personally invite these young women to participate in district activities and mentor them in ways to use their gifts in ministry to the people of the world through LWML.

Prepare now for your congregation’s LWML Sunday by ordering the new 2019 resources. To ensure availability and delivery, all LWML Sunday orders should be placed before September 1, 2019. To view these materials, go to www.lwml.org/lwml-sunday.

Board of Directors Meeting

The Board of Directors (BOD) will meet August 13-17, 2019 to begin planning for the next biennium. They will be choosing committees for the biennium and choosing a theme and Scripture for the 2021 LWML Convention in Lexington, Kentucky. Please pray that the Holy Spirit will guide them in all they do and keep them safe as they travel to and from St. Louis.

If you are interested in committee service at the national level, you may want to consider completing a Personnel Resource Profile and sending it in. The BOD will be reviewing all the forms at the upcoming meeting. It’s not too late! Click here for the form. 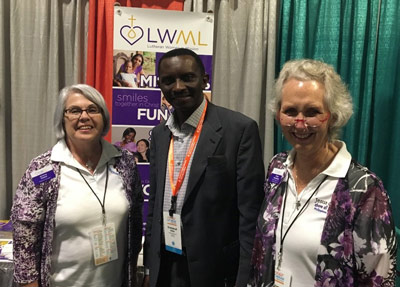 In Praise to the LORD! The theme from the 2019 Mobile Convention was felt at the LWML booth at the LCMS Convention in Tampa, Florida. As they “worked” the booth, both Meeting Manager Arlene Naasz and Vice President of Communication Char Kroemer shared how the interactions with those who stopped by were very humbling and heartfelt. One such conversation took place when the bishop of the Evangelical Lutheran Church in Tanzania stopped by to share his thanks for the 2017–2019 LWML Mission Grant for the Tanzanian Sewing Center, a project of the Evangelical Lutheran Church in Tanzania (ELCT). The ELCT established the Bishop Makala Sewing Center to teach young women sewing, life skills, and the Gospel. It was an honor and privilege to accept Bishop Makala’s thanks on behalf of every woman in LWML. 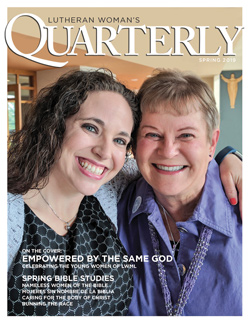 Another emotional interaction came when Kati Meyerhofer’s father-in-law John stopped by the booth. Kati’s photo had been featured on the cover of the spring Lutheran Woman’s Quarterly (LWQ) as the subject of a feature article on being a young woman in the LWML. Her story continued in the summer issue as someone battling depression and anxiety. Kati, by God’s grace, is doing very well and when John saw copies of the spring issue at the LWML booth, he asked for extras to take with him and returned to intentionally take a picture of both the LWML booth and the LWQ cover photo as one. To God be the glory!