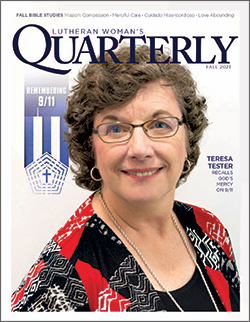 Where Were You When …
In my lifetime, as well as that of my parents, I’ve often heard conversations reciting vivid details of their circumstances on the day they first heard about … Pearl Harbor … Kennedy’s assassination … Mount St. Helens … Oklahoma City … the Twin Towers … Katrina. This year marks the 20th anniversary of 9/11, when terrorists attacked the U.S. Evildoers left the country in turmoil and life, as we knew it, was changed. Footage of the events and details of the day became fixed in our minds. Even before cameras recorded things, events rocked the world of our ancestors … the Titanic … the Alamo … the burning of Rome … the Crucifixion. When disaster strikes, is my first response to love?

Like a stunning slap to the face, life becomes frozen for a few moments, hours, or days. Some wonder where God is when these things happen. A line from a movie (believe it or not), says this (paraphrased): “My children know I have unconditional love for them. It doesn’t mean that they won’t get hurt. I can be walking right beside them when they fall. But they know that I will always be there to pick them up, comfort them, and surround them with my loving arms.” This father’s first response was to love … unconditionally.

At the LWML Lexington Convention’s closing worship service, the proclaimer, The Rev. Dr. Ryan Peterson, reminded us that the moment we’re in doesn’t pause the mission we’re on. The devil would like us to think so and wants to get us occupied
with failure or success, but, no matter the circumstance, we’re still sent on HIS mission. There’s no such thing as an unsent Christian. The promises of God are ours, and they will always find their fulfillment in Jesus. Why? Because Jesus’ response
to us is to love us.

In this issue you will read of those whom God has sent during those trying times — those responders put out the fires, create order out of chaos, and heal the wounds of the
broken. As you read, study, and devote your time to God, pray for those who respond to our needs. Especially pray for those Christian responders who, grounded in the Rock, are responding in love, as our heavenly Father first responded to us by sending Christ to show how much He loves us when He saved us from our sins.

Please share stories and photos of joyful Lutheran Women in Mission who demonstrate the enduring “heart” of LWML by being loving caregivers or by supporting hospice workers and organ transplant donors.