The History of the Pin.

The 2017 LWML Convention in Albuquerque, NM was the 20th anniversary of the Young Woman Representative (YWR) pin. The YWRs are so special that every current LWML pin is a result of the YWR pin.

Prior to the 1997 LWML Convention in Charlotte, North Carolina, it was decided that a more permanent way to recognize the YWRs was needed. Virginia Von Seggern was serving as the Vice President of Mission Education at the time; Gloria Edwards was the LWML President. Here the process of finding just the “right and memorable” piece of jewelry began.  They searched and investigated, looking for just the right piece of jewelry that a young woman could proudly wear both in her everyday life as a professional and as a YWR at conventions and other LWML functions.

Eventually, a simple printed quilt block pattern was found. It showed a beautiful locked set of double-links and became the inspiration for the pin. A jeweler was contacted, and the first prototype of this pin was delivered to the Jackson Hole, Wyoming, home of President Gloria, as the Executive Committee (EC) was meeting there in April of 1997. The EC granted approval and it was produced for the very first time for each YWR at the 1997 LWML Convention in Charlotte, North Carolina.

“The double links represent LWML, women of all ages who are joyfully united in spirit and purpose. While each member is different, in Christ all are linked together, complementing one another’s gifts, talents and strengths”.  Adopted June 1997.

Two things surrounding those pins happened at that convention. The first was many requests from District Presidents wanting YWR pins for their YWRs that had served at LWML conventions in the past. That was granted.

The second happening was that these very special pins created severe pin envy!  Comments of “Where did you get that pin?” or “Can we get one, too?” were heard all over the convention hall.  Hence, the onset and creation of the famous circle LWML pin! 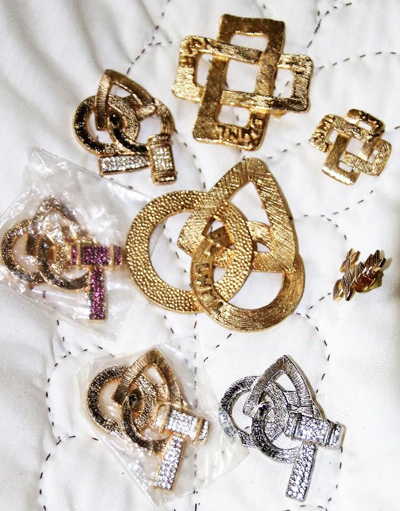 Eventually, a very special pin was created for the president of the LWML following the major structure change adopted at Minneapolis in 1999 when the term “international” was removed from the LWML’s official name. The President’s pin, complete with gavel, was worn for the first time by Virginia Von Seggern at the San Jose convention in 2001.

The Past Presidents often wear their pins and when attending an LCMS event, they wear it proudly! It packs respect, dignity, and service to the League and our Lord.

Twenty years later, YWRs that attend a national convention receive their YWR pin from their District President during their district caucus. All in attendance can tell if a woman has attended a national or district (the smaller pin) convention as a YWR. The only way to get or replace (in the event of loss or other situation) a new YWR pin is through a District President.

Each of the national presidents have been gifted a YWR pin. In other words, the YWRs have made them all young again! Virginia’s is very special as the pin belonged to her daughter Kay, who was a YWR for Nebraska South at the 1991 LWML Convention in Cleveland, Ohio.  She served as President Virginia’s page in San Jose, 2001 and received her “Crown of Glory” two weeks later on July 24, 2001. Kay’s pin is one of Virginia’s most prized possessions, and she wears it proudly!

Written by Virginia Von Seggern for the 2017 LWML Convention in Albuquerque, NM.
Posted on August 03, 2018 4:32 PM by System Administrator