The Nebraska North LWML convention was postponed until September 25–26, 2020, then the in-person gathering was canceled. They may consider a one day virtual event. However, elections were held, and Rev. Jared Hartman, Wisner, Nebraska, was elected as their junior pastoral counselor. Also selected were eight mission grants and scholarships totaling $77,000. The convention theme “Let Us Fix Our Eyes on Jesus,” was based on Hebrews 12:2, looking to Jesus, the founder and perfecter of our faith, who for the joy that was set before him endured the cross, despising the shame, and is seated at the right hand of the throne of God.

The women of the LWML Oregon District were ready to “Sing! Tell! Declare!” his glory among the nations, his marvelous works among all peoples! (1 Chronicles 16: 23–24) at their convention which was scheduled for June 26–28, 2020. They revised their plans and will have a one-day event on September 26. The district sent out paper ballots and on July 2, 2020, Carol Reis, Sublimity, Oregon, was installed as district president. They selected 13 mission grants, with a mission goal of $97,000. 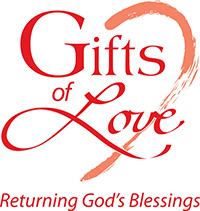 The LCMS Foundation shared one of our LWML donors' stories through a Facebook post on July 25. The Foundation is highlighting its ministry partners and will be highlighting LWML. Through this Facebook post, the Foundation is providing a wonderful way to share what God is doing through LWML and Gifts of Love. The story that was shared is about Chuck and Joanene Falk from the LWML Pacific Southwest District. They are amazing disciples of Christ! This donor story was in the lwmlgiftplan.org email sent out last week. To read the entire story click here. 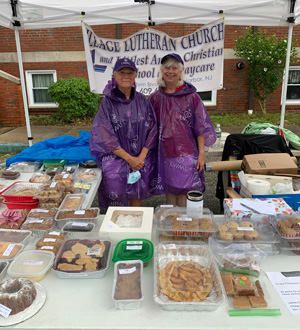 The LWML women of Lanoka Harbor, New Jersey, have sponsored bake sales (with proceeds donated to mite offerings) at the local farmers market for several years. Church members are asked to donate baked items, and they really come through with goodies, ranging from pies, to crumb cakes, to cookies, and cobblers.

This past weekend, the women held on as long as they could in a downpour of about four inches of rain, while modeling their very stylish LWML rain gear. It was not a sell out at the market, but at Sunday morning’s drive-in church service, the congregation bought everything that was left. Over $1,000 was raised in two weeks. This could be a way for your group to contribute to mites and have fun, too!