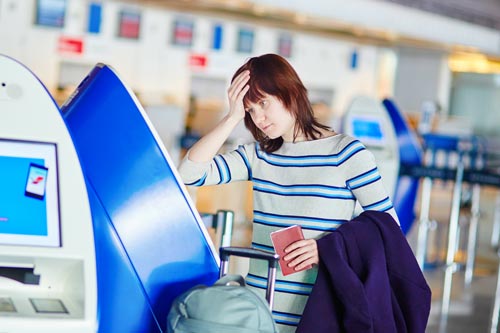 As I was travelling home from the LWML Interdepartmental Meeting in St. Louis, I had quite a long layover in Atlanta. I passed some of the time by just walking up and down the length of the terminal. At some point, I passed a woman going the opposite direction and she was absolutely sobbing. Now that’s pretty hard to ignore. Yet, everyone was ignoring her. And, I was trying really hard to do the same. But, I just knew the Holy Spirit was prodding me to see if she needed someone. And, besides, hadn’t I just spent a full four days at an LWML meeting talking about Gospel Outreach?

So, I turned around and tried to catch up with her. At one point I thought she had disappeared, but fortunately I spotted her at an airline counter where they help you with flight problems. I waited patiently as she explained her problem to the airline person. I gathered that she’d been flying all day and had perhaps missed a connecting flight. At least the airline person was compassionate and had a calming influence.

Once the woman left the counter I approached her and asked if there was anything at all I could do for her. She shared with me that her grandmother was ill and she was worried about getting to see her. She had calmed down considerably at this point and said she just needed some rest. I walked a little way with her and repeated my offer to stay with her. She declined my offer so I promised to pray for her grandmother and went on my way. I am confident the woman made it to her grandmother’s side and often say a prayer that they are both well. I am so thankful that the Holy Spirit led me to reach out to that woman. My prayer is that next time I won’t hesitate, not even for a second!

So if there is any encouragement in Christ, any comfort from love, any participation in the Spirit, any affection and sympathy, complete my joy by being of the same mind, having the same love, being in full accord and of one mind. Do nothing from selfish ambition or conceit, but in humility count others more significant than yourselves (Philippians 2:1–3).

These words from Saint Paul’s letter to the Philippians are pretty straightforward. They are sort of the “just do it” words of that time. The admonition to “do nothing from selfish ambition or conceit” hit the nail on the head. Sometimes we need to question our motives, don’t we? On the other hand, that same “conceit” can occur from a different angle. What about times when we might not want to “stand out” or look like a “goody-two-shoes”? Perhaps as in the story above, because the distraught woman was making a scene of sorts, it would be easy to not want to be associated with her. Feelings of embarrassment might plague us when attending to a homeless person or a mentally unstable person. That’s when we need to be reminded that the only thing that matters is doing what God’s will is for us.

Dear Father in Heaven, please continually remind me that I need to focus on You and Your will for my life. If death has no power over me then certainly no man has power over me. Show me the people that need me, lead me to them, and give me the courage to serve them. In Jesus’ precious name, Amen.