Mission Work at Any Age 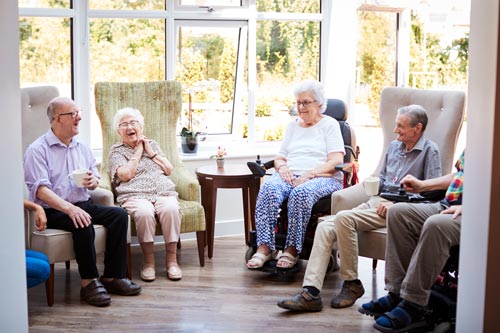 As my husband’s parents got older with many health issues, the family decided that they would be better off in an assisted living facility.

Leo, who was in his 90’s, wondered what he could do as he spent his time at the facility. He had always been very active in church. He decided to make it his mission to share his Lord with anyone and everyone that lived there. He quickly learned each and everyone's name. At meal times, he would sit at a different table each time. As the first course was being served, he would ask if he could bless the food. Some people were so uncomfortable about him saying a prayer that they would not let him sit at their table any more. That didn't stop him; he continued to say a table prayer at each meal.

As time went on, he decided he wanted to do more. He wanted to start a Bible class but felt he wasn't good enough to lead it. Leo kept telling me that he was not a teacher. I encouraged him, and even helped him plan his first few lessons. He soon found that the Lord was indeed blessing his work and he enjoyed preparing and teaching the group. He was able to share the Word for many years at the facility.

After Leo received his Crown of Glory last August, the facility director visited Leo’s pastor. She asked if there was someone who could continue the class because it was a highlight in the residents’ week. What a wonderful legacy Leo left all his friends and neighbors.

For I am not ashamed of the gospel, for it is the power of God for salvation to everyone who believes (Romans 1:16).

It is almost certain that Leo was placed in that assisted living facility to share the saving grace of our Lord Jesus Christ with his neighbors and friends. Just because he was reaching the end of his life, he still had things to do to praise his Heavenly Father. At first, he felt unprepared, but the Holy Spirit was there to help him share the Word of God. Not only was it a blessing to those who joined Leo each week for Bible study but it blessed Leo’s life as well.

Dear Father in Heaven, thank you for people like Leo who use whatever their situation in life to give You thanks and praise and further the spread Your Gospel. Thank You for the Word that proclaims salvation to all who believe and the Holy Spirit who guides us and provides the words that we can use to tell others of your great mercy. Continue to give us opportunities to share Your great love with others. In Jesus name we pray. Amen.