Most people think of Hawaii as paradise, but to Native Hawaiians, Kanaka, it is quite a different place. In recent years, the number of homeless people in Hawaii has grown, with poverty rising, leaving few people in the middle class. Most of the ministry work is done in urban areas by non-Kanaka men and women to non-Kanaka people. To successfully engage the Kanaka people in the Christian faith and to provide the support and assistance that Kanaka people need to begin to overcome the serious social issues that plague them, missionaries must embrace the Kanaka culture. Clarence DeLude III (Kanaka), who is on staff with Lutheran Indian Ministries, is enrolled in the Cross-Cultural Ministry Center Program at Concordia University, Irvine, California, which leads to ordination. As a called and ordained servant of the Word, Clarence, a Native Hawaiian will be used as God’s instrument in bringing the Gospel of Jesus Christ to his fellow Kanaka people. Grant funds would be used for scholarships for Clarence, VBS/Teen Camp, on-going Bible study, and Sexual Abuse and Leadership Training (SALT) seminars.

*$40,000 of this grant has been repurposed to Restorative Programs for Native Americans in Arizona with the approval of the LWML Board of Directors in June 2019. 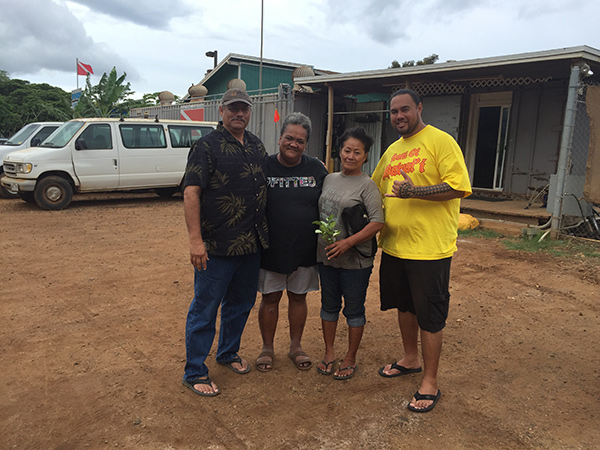 Clarence meeting with leaders from the Waianae Neighborhood Board and homeless village leaders: Clarence lives in Waianae, serving the people of Oahu, the third largest and most densely populated of the Hawaiian Islands. Clarence partners with those in the community to address the issues of poverty and homelessness which are so prevalent in the community. 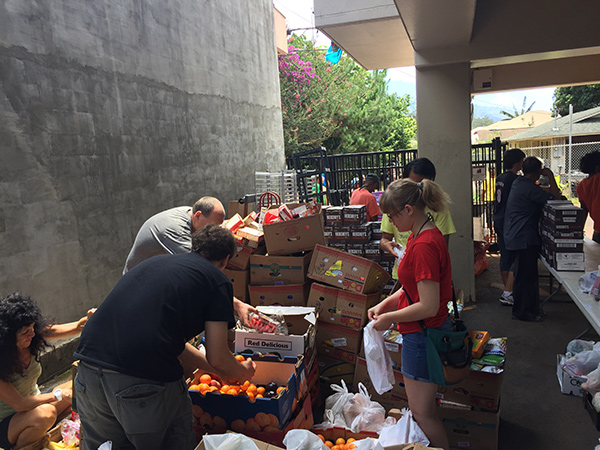 Workers at a homeless shelter in Waianae: Within a three-mile radius of the church, there are three homeless shelters, as well as 450-800 people living within the bushes of the homeless campsites. Within this community of 13,000, 29% of those under age 18 live below the poverty line. Estimates of more than 7,500 people live on Oahu's streets and beaches.

WHEREAS, Isaiah 61:1 says, The Spirit of the Lord GOD is upon me, because the LORD has anointed me to bring good news to the poor; he has sent me to bind up the brokenhearted, to proclaim liberty to the captives, and the opening of the prison to those who are bound, and Native Hawaiian, Clarence, of Lutheran Indian Ministries, is ministering to Native Hawaiians on the island of Oahu; and
WHEREAS, Clarence DeLude III, who has a master's degree in Lutheran education, is enrolled in the Cross-Cultural Ministry Center Program at Concordia University, Irvine, California, leading to ordination in 2019; and
WHEREAS, The majority of Native Hawaiians live in poverty which contributes to dysfunctional behaviors in families, substance and sexual abuse, violence and suicide that leave many hurting with little hope; and
WHEREAS, A former church building is available for various Gospel-oriented programs for youth and adults such as: Vacation Bible School, Teen Camp, Bible studies, seminars, training of facilitators, and cultural arts program to draw Native Hawaiians to Christ and His church, thus bringing hope and restoration; therefore, be it
RESOLVED, That the delegates gathered at the 2017 Lutheran Women's Missionary League Convention in Albuquerque, New Mexico, vote the sum of $75,000 to help fund theological training for Clarence and support Gospel-oriented programs for Native Hawaiians to know Jesus Christ, the only source of Truth, Restoration, and Hope. 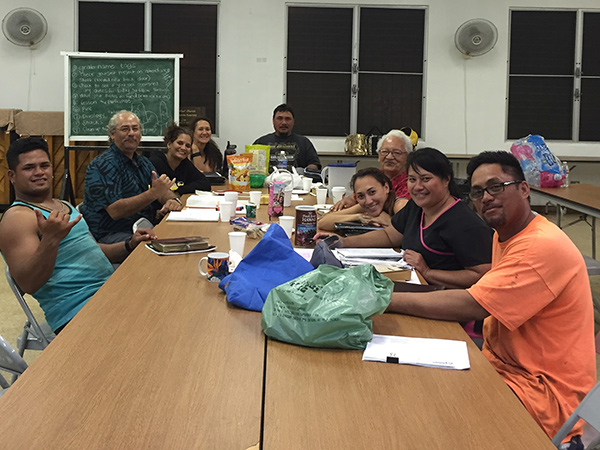 Clarence leading Bible Study: Clarence DeLude III (Native Hawaiian) joined the staff of Lutheran Indian Ministries in 2014. Clarence, who has his master's degree in Lutheran education, is enrolled in the Cross-Cultural Ministry Center Program at Concordia University, Irvine, Calif., which leads to ordination.
Members of Trinity Lutheran Church in Wahiawa, Clarence's home church, meet weekly for Bible study and prayer. In the five weeks prior to VBS, Clarence and the group held weekly prayer walks.
"The goal of the prayer walk," Clarence explains, "is not to preach, but rather to offer prayers for our neighbors." He hopes the outcomes from this group outreach will be two-fold:
• The local community, many of whom live in poverty, would begin to understand Christ's love for them and see the church as a place where they are welcomed; and
• Secondly, that the members of Trinity would become familiar with the area and see the needs present there.

Homeless camp in Waianae: Hawaii has the highest rate per capita of homeless people, greater than the homeless rates in New York and California. Many of the homeless in Hawaii defy the stereotype of the mentally ill or drug addicted, but rather are often families with men and women working several jobs, and struggling to get a foothold in a place with a high cost of living and low wages. 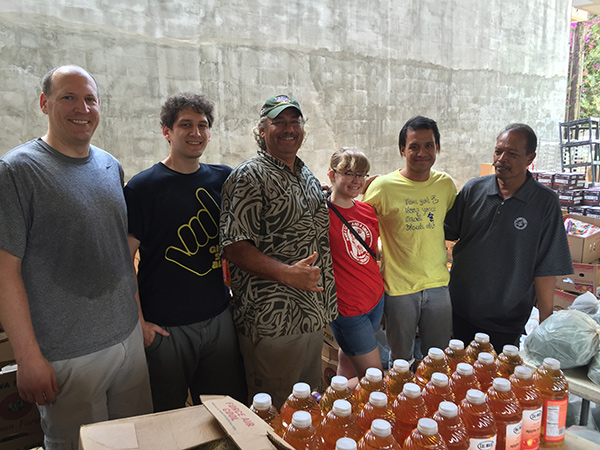 Clarence with team of volunteers feed the homeless in Waianae monthly. 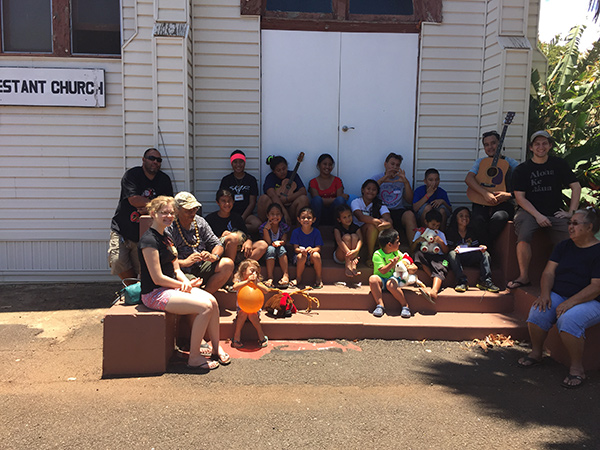 VBS in Waianae: A former church building is available for use in Waianae, which is located adjacent to a high rise, low-income housing area where 200-300 residents live in close proximity to a poorly-rated elementary school. In this building, Trinity Lutheran Church held Vacation Bible School for the first time after many years without a program, reaching outside its walls and embracing the community. This is the area where the prayer walks took place and feeding of the homeless is done monthly. 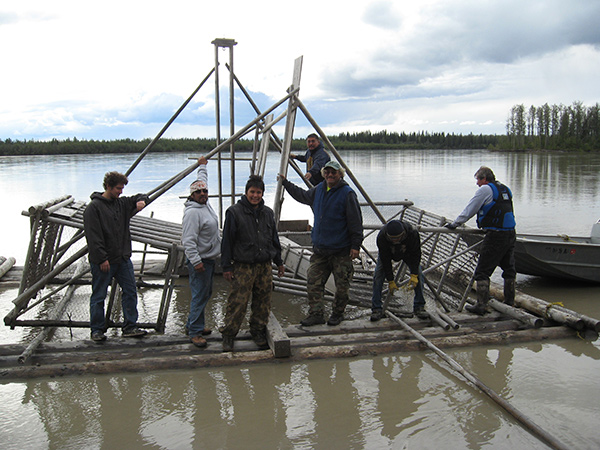 Clarence and team from Navajo go to Old Minto, Alaska, for servant event: Because challenges facing a Hawaiian ministry are similar to those in Alaska and New Mexico, Clarence has been to Lutheran Indian Ministries' Fairbanks Mission Training Center several times. He has served as a volunteer in several Alaskan villages, including Old Minto where he joined a team from Shepherd of the Valley Lutheran Church of Navajo, New Mexico, to help restore a cultural camp. These cross-cultural experience have helped prepare Clarence for the unique ministry in Hawaii.